The Essential Phone has had its share of issues. The most severe issues have been centered on the device’s camera performance, which was not competitive at launch. Essential has shipped numerous OTA updates that have improved camera performance, and users can improve it by installing the unofficial Google Camera HDR+ port as well. The second major issue was the excessively high launch price. Subsequently, the device received a price cut, which increased its value proposition.

In terms of software, the Essential Phone was launched with stock Android 7.1 Nougat. The company promised to update the phone to Android 8.0 Oreo. After numerous beta updates, the company made a U-turn and stated that the phone would jump directly from Android Nougat to Android 8.1 Oreo, skipping Android 8.0 because of the issues the company was facing with it.

A month ago, the company released the first Android 8.1 Oreo beta for the Essential Phone. The beta update included an experimental patch for the device’s slow-scrolling lag. The slow-scrolling “jitter” was a long-standing problem of the device, as it never felt as fast and smooth as its competitors despite having the Qualcomm Snapdragon 835 system-on-chip. 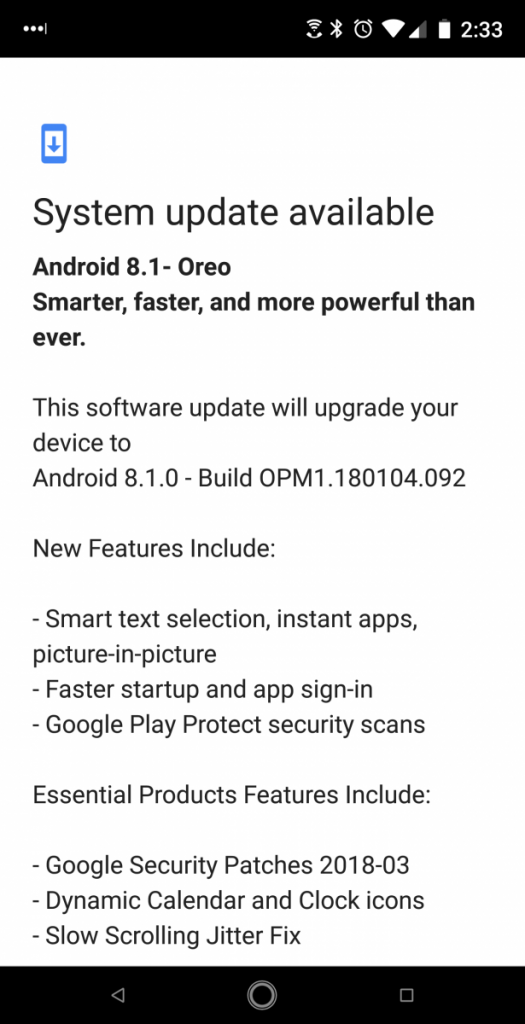 Now, Essential has released the stable Android 8.1 Oreo update for the Essential Phone. The update brings standard Android Oreo features such as smart text selection, picture-in-picture mode, notification channels, faster startup, and more. It also includes the slow scrolling jitter fix as well as dynamic clock and calendar icons. It comes with the March security patch as well, which is good to see.