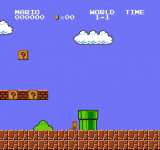 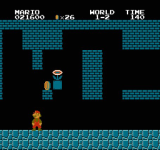 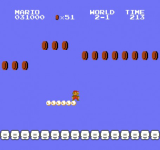 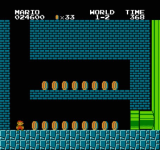 The main heroes of the game are a plumber Mario and his brother Luigi (as a game for the second player character). The goal – to get through the Mushroom Kingdom, eluding or destroying soldiers Turtle King Koopa (also known as Bowser) to rescue the captured Princess them captive. Mario (or Luigi) attacks enemies by jumping on top of them (this method kills mushrooms Gumba and temporarily neutralize turtle Koopa, forcing them to hide in their shells) or by hitting the platform on which the enemy below. “Frightened” of turtles can be used as a weapon against other enemies, pushing the shell in front of him: speeding, he sweeps away all in its path, but when it encounters an obstacle, reverses direction, and can hit most of Mario. Some enemies, like porcupines back, you can not jump, as this hurts Mario. They can be killed by shooting fireballs at them, kicking turtle or a blow to the platform below.