Google is clearly planning a big shift of direction going forward with Android P. It is, quite obviously, the biggest update to the Android OS in over 4 years, since Android 5.0 Lollipop and Material Design were first introduced to the public. And while the same was said for Android 7.0/7.1 Nougat and Android 8.0/8.1 Oreo, we really mean it this time: lots of behavioral changes, new animations, refined notifications and a new, refreshed UI/UX based on Google’s updated Material Design guidelines make P feel like a whole different beast compared to Oreo or Nougat.

The first developer preview for Android P was released around March, and we already went over everything new. Initial reactions to the heavily facelifted Android version were decidedly mixed: some people praised the eventual evolution of Google’s existing Material Design guidelines, while others slammed it for looking too similar to Apple’s iOS. One thing was made clear, though: Android was going to look different this year, love it or hate it.

In the midst of Google I/O 2018, the second Android P developer preview was made available for a handful of devices, bringing the OS to a beta state and giving us a bunch of new features and improvements. Today, we’re going over some of these improvements.

Apple’s solution to removing the home button in the iPhone X, rather than the implementation of a navigation bar with virtual buttons, was adding a gesture system. It proved to be easy to pick up even for non-tech savvy users. Given that this is proving to be a quicker and more intuitive solution than virtual buttons, it is to be expected that Android phone makers will start using gesture-based navigation very soon. OnePlus and Xiaomi were among the first ones to implement gestures on their Android forks, but Google will also be adding gesture navigation to AOSP with Android P. 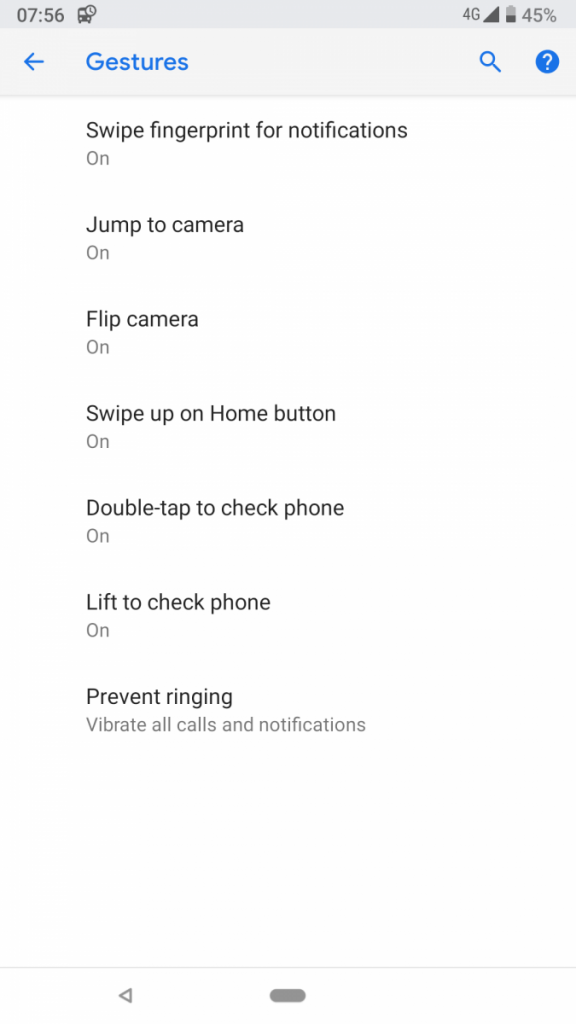 The stock Android implementation, however, works somewhat different from most implementations we’ve seen and resembles WebOS gestures more closely than iOS. We still have a back button, for one, although it’s shown contextually. And the navigation bar with gestures still takes up the same amount of space than the one with virtual buttons, so there is absolutely no screen real-estate gains here by using gestures instead of buttons. But the Recents button has been removed completely, and the home button is replaced with a gesture pill. It’s not enabled by default, so if you’re team buttons, you can stay happy in DP2.

It’s still kind of rough around the edges, but then again, we’re talking about a beta, so the gesture function still has some place for improvement. 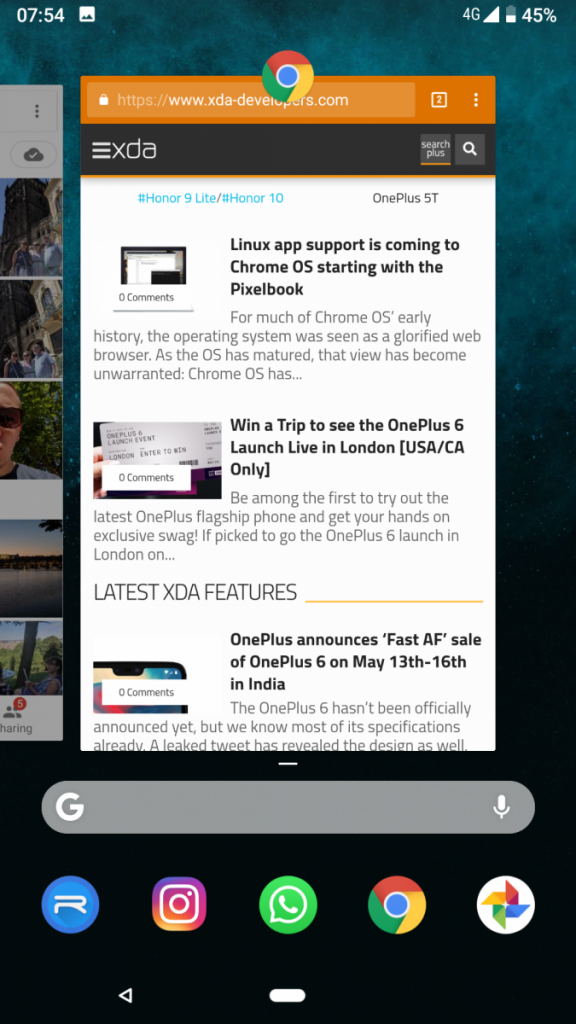 One really cool thing about the new Recent Apps screen is the ability to interact with apps without fully jumping in. You can long press to select text and images from the Recent Apps screen. This should make multitasking a lot easier.

Android P is also introducing some machine learning-backed party tricks for extending your phone’s battery life, as it introduces what Google calls “Adaptive Battery”. The system takes notes of what apps you use frequently, and how frequently you use them, and then applies restrictions on the ones you use the least so that they consume less battery. Google doesn’t mention specifically what kind of restrictions they apply on these apps, but we’re guessing they’ll have a greater effect on apps with invasive background services that remain running even when you’re not using them.

If a game is keeping an unnecessary background service and you’re not addicted to that game, then this feature will come in pretty handy, as that background service, while it won’t be killed off completely, will be limited to the point it’ll have a negligible effect on your battery. We’re yet to see if this will actually make a difference in real-world usage, but it does sound interesting.

Low battery notification shows what time your phone will power off

Another AI-powered feature making its way to Android P is App Actions. And its concept is pretty simple: based on what you usually do with your phone, your most frequent contacts, and other usage statistics, Android will try to take the lead, predict what you’re going to do and offer you suggestions on what to do next with your phone—not necessarily an application, but it may also suggest tasks, app shortcuts, and other things. If you like talking to your significant other on WhatsApp, a shortcut for that particular chat may appear on your launcher. And if you plug in your headphones, an action for getting your favorite playlist on Spotify kicking will appear too.

App Actions will not be limited to the launcher, however: according to Google’s description, you might be seeing them on other places like the Smart Text Selection, the Play Store, the Google Search app, and even the Google Assistant. Again, we remain to see how this will actually perform in day-to-day usage, but the basis of it sounds pretty interesting.

Slices are a way to essentially display interactive pieces of apps within another app. A Slice is an interactive snippet that shows content from an app outside of the app. The example Google showed was looking for a Lyft. You simply search for “Lyft” in Google and you’ll see results from the Lyft app. When you tap on those results it will launch directly into that action in the app. This should save you time from diving in and out of apps. 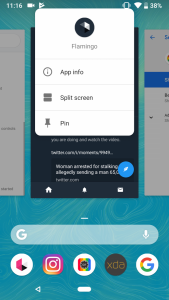 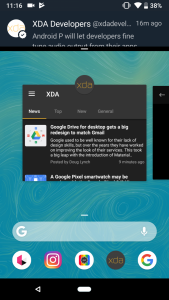 Since it was introduced with Android 7.0 Nougat, split screen was actually a really anticipated feature, but it has gone under the radar due to a complete lack of publicizing. Since it’s not advertised absolutely anywhere, and the only way to enable it is to either long press Recents or dragging an app from Recents, it’s not really obvious to everyone. And while it’s not really a forgotten feature, as many tech-savvy users (including myself) use it on a daily basis, it’s mostly absent for a big part of the consumer market. Android P changes the way the split screen is launched in what we think is an attempt to make it more accessible.

Now, in the renewed Recents panel, just tapping the app icon at the top of the preview window brings up a contextual menu, with options to either see the App Info, Split screen mode, and Pin. In my opinion, I don’t think this will make that much of a difference or impact, but then again, I don’t really know Google’s reasoning behind this. 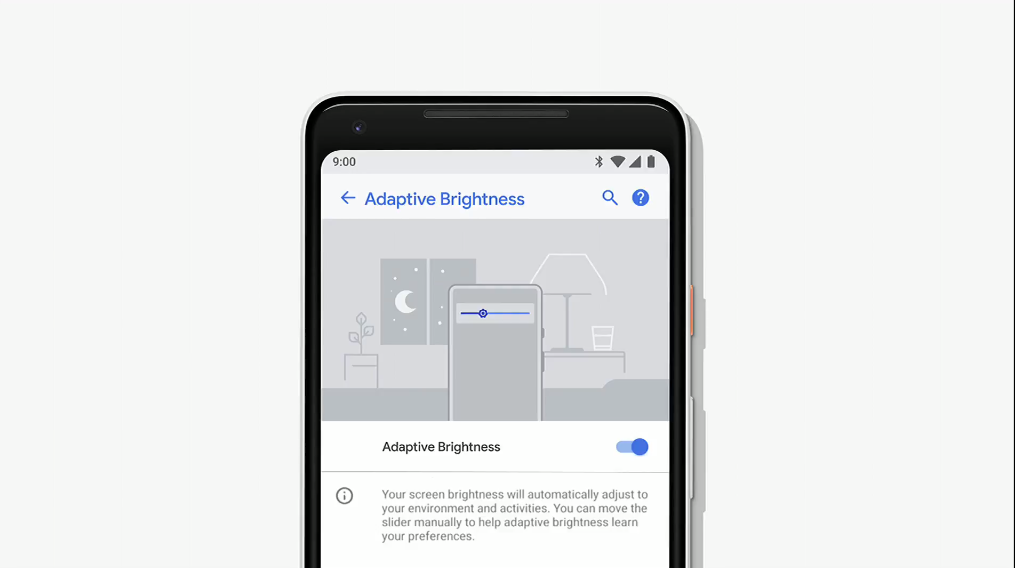 More machine learning shenanigans being thrown into Android P, this time, to refine the Adaptive Brightness feature. Adaptive Brightness was actually introduced with Android 5.0 Lollipop to replace the 4.x-era Automatic Brightness feature. While automatic would get totally rid of the brightness bar to control absolute brightness using solely the ambient sensor, adaptive would let you use the brightness bar to choose a range of brightness—it would still get dimmer or brighter using the ambient sensor, but you could manually choose how dim or how bright would it get. With Android P, this feature is being refined with machine learning.

According to Google, Adaptive Brightness will take note of your habits by learning how frequently you move your brightness bar, and in what circumstances do you adjust it. Then, it will try and do the same thing for you and adjust it in these situations, in an attempt to adjust it perfectly to your surroundings. As it’s machine learning, it should get smarter and more accurate as you use it. 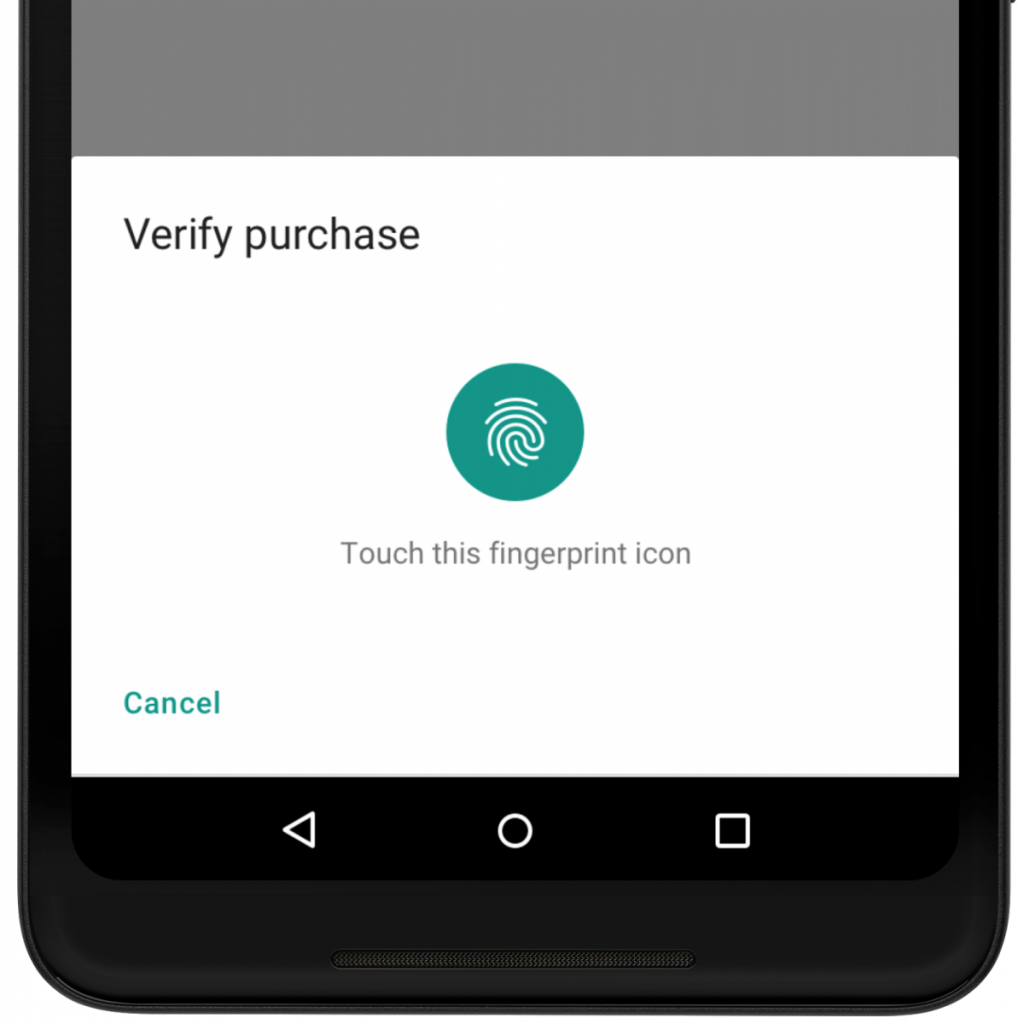 While fingerprint scanning is the most widely used biometric verification option across the whole Android ecosystem, manufacturers have been going for other biometrics as well. Since the launch of the Galaxy Note 7, Samsung has included an iris scanner on all their flagship devices, including the Galaxy S8, the Galaxy Note 8, and the recently launched Galaxy S9. And with the iPhone X ditching fingerprints completely for face scanning—using multiple sensors to accurately identify your face—it’s obvious certain OEMs will try out 3D scanning very soon.

Android P is going to officially support these biometric methods as a replacement for fingerprints. Instead of calling for the USE_FINGERPRINT permission in your app, developers can now call instead USE_BIOMETRIC, which covers fingerprint, iris, and face scanners alike.

Google talked a lot about “Digital Wellbeing” when they were showing off Android P. It was clear this is an important part of the release. Oddly enough, Digital Wellbeing is about helping users use their phone less. Google has included a new suite of tools to help get people off their phone.

The Dashboard shows how much time users are spending on their phone and what apps are using up that time. It even shows the number of unlocks and notifications you have received. App Timer allows users to limit themselves to a certain amount of time for using an app. The app icon will even be grayed out when the limit is close. Wind Down will gray out the entire interface at night to remind you to go to sleep. It works in conjunction with Do Not Disturb and Night Light.

Do Not Disturb blocks visual distractions 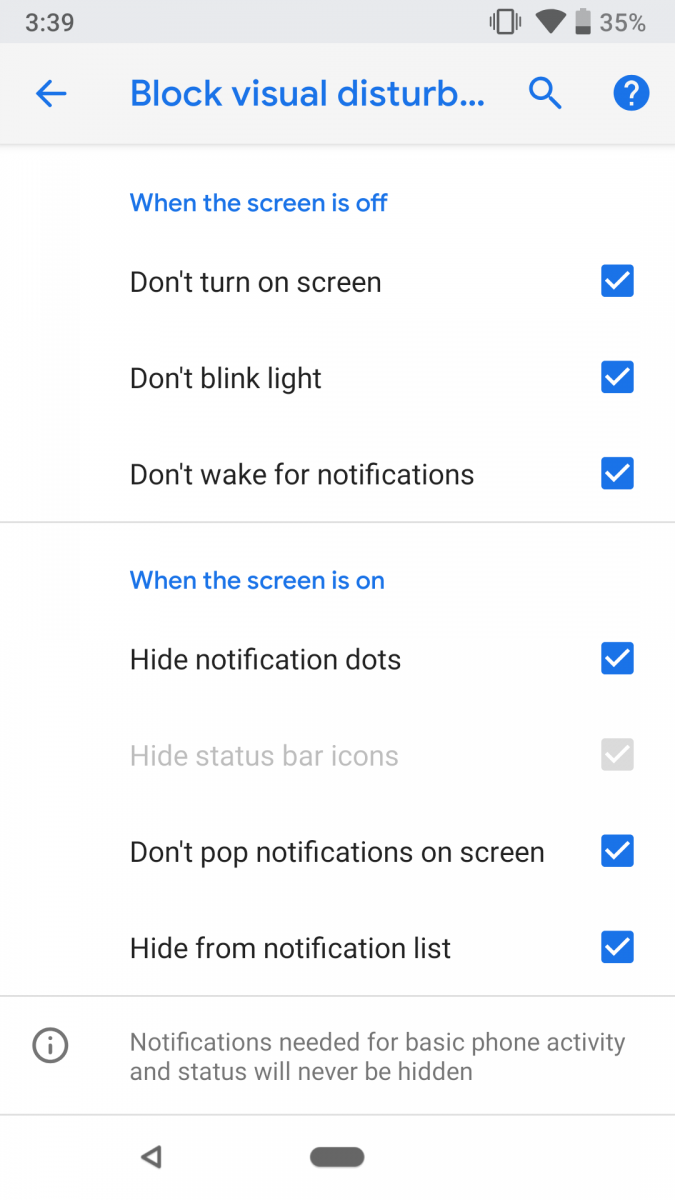 Stock Android’s Do Not Disturb mode has gone through many different iterations since it was initially in Lollipop, but its purpose has always remained the same: it’ll shush your phone momentarily to avoid distractions originated from notifications. And while it does the job at keeping your phone calm while it’s in your pocket, it doesn’t block heads-up notifications, which serve as visual distractions while using the phone or playing games.

Starting on Android P, visual distractions are also blocked. Heads up notifications get in your way while watching videos or playing games, so this serves as a really welcomed improvement. Do Not Disturb is more aggressive in general in Android P. Google is using AI to learn what notifications you don’t want to see. If you swipe away notifications from a certain app without taking action, Android will ask if you want to block them entirely.

Android P also brings other, minor improvements that, while they may not be noteworthy of a section by themselves, are still pretty important refinements that improve the overall UX. 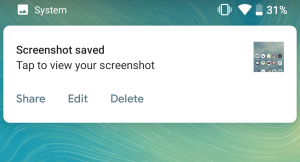 Markup screenshot editor has been revamped, complete with a new sharing option and improved UI. Additionally, screenshots are now saved in Pictures/Screenshots rather than Pictures, meaning that the original screenshot is now lost. 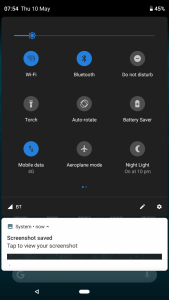 Quick Settings switched back to horizontal pages, volume moved to the top. 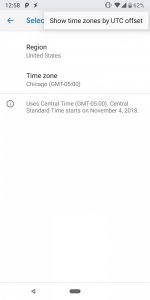 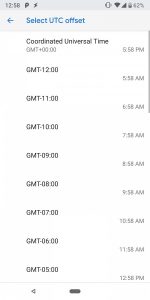 You can now show and select timezones by their UTC offset rather than just their location. 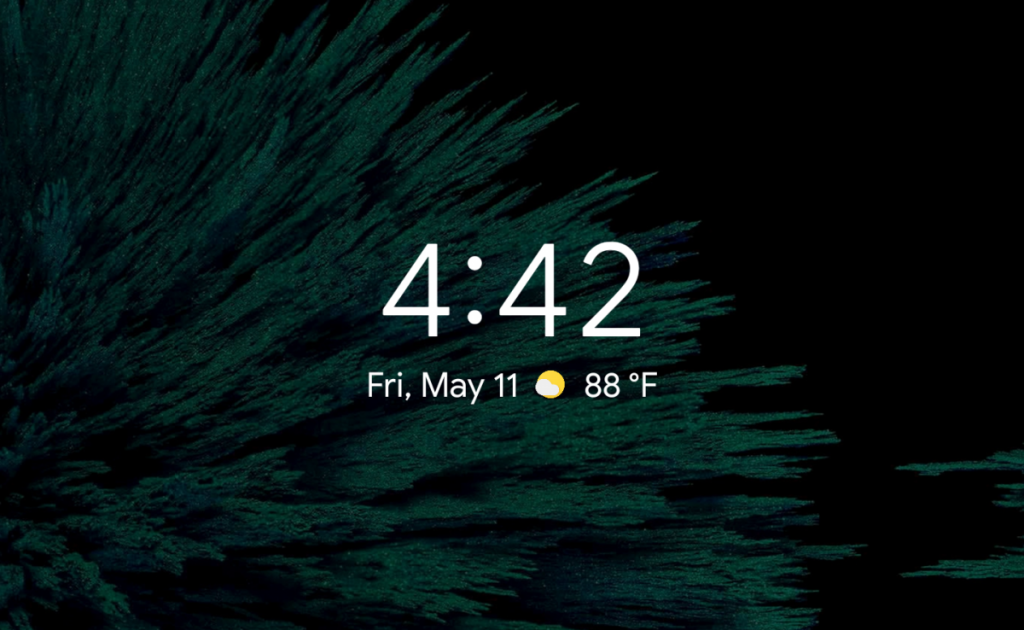 Notifications tell you if camera/microphone are in use 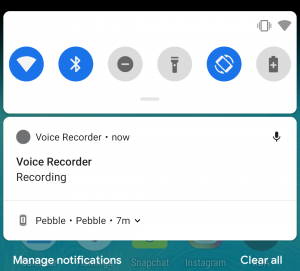 Notification for running apps shows if they’re using the mic or camera. 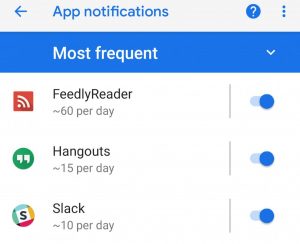 You can now see how often notifications are posted on a daily/weekly basis.

There is now a “USB controlled by” option when you plug your device in. 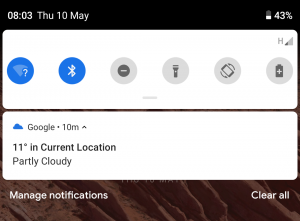 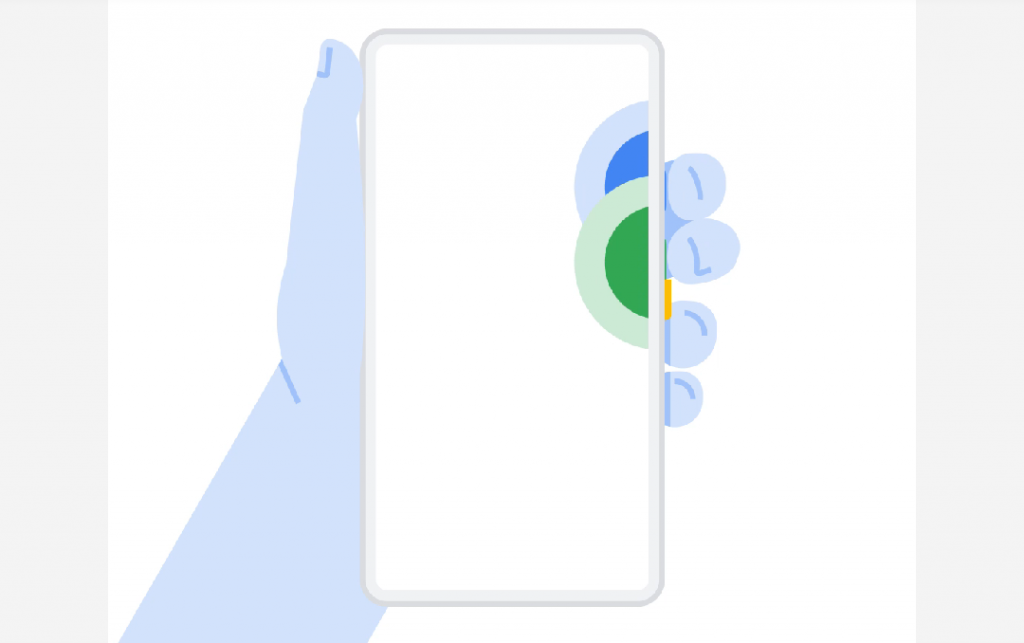 Volume Up + Power changes the ring mode to Vibrate by default. It can be customize to Mute the phone too. This option is located in Settings –> System –> Gestures.

Bluetooth icon disappears from the status bar when disconnected. 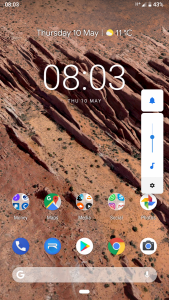 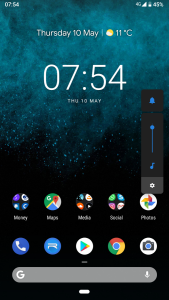 Volume slider is smaller with a new ring mode shortcut. 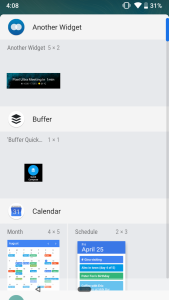 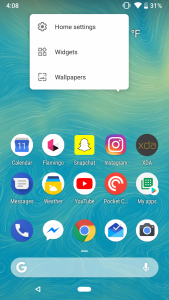 And last but not least, the Pixel Launcher has a new widget picker and Home Settings pop-up.

The list of new features and improvements will continue to grow as we dig through this release. Let us know if you have discovered anything new while using Android P Developer Preview 2! What do you think of this version?