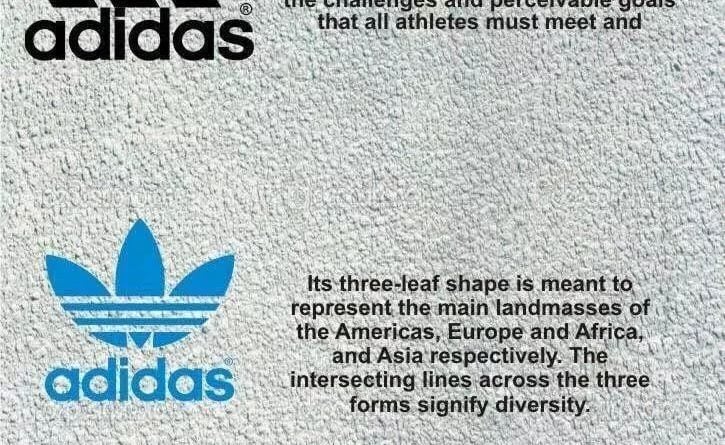 The four hoops represent the 4 founding companies(the
first ring from the left represents Audi, the second
represents DKW, third is Horch and the last ring
Wanderer) of the Auto-Union Consortium.

Alan Turing , dubbedRob Janoff, the designer of the Apple logo, claims that he didn’t explicitly intend this meaning when he created the logo in  1977. He didn’t have to. Mr. Janoff said he included the bite “for scale, so people get that it was an apple, not a cherry. Also it was kind of iconic about taking a bite out of an apple.”

The tri-star shows the company’s dominance over
the land, sea and air against all its competitors, both
in quality and style.

The NIKE logo, also known as ‘SWOOSH’ represents
motion and speed. In Greek mythology, Nike is the
Winged Goddess of Victory. The mythological
associations for the brand Nike are flight, victory, and
speed. It is not a ‘Checkmark’ as thought by most of the
people.

BMW (Bayerische Motoren Werke)
The logo has been portrayed as the movement of
an aircraft propeller with the white blades cutting
through a blue sky.

“The white lines passing through IBM’s logo
represents “equality above all else.”

The large yellow representation of letter M indicates
pair of nourishing breasts meant to trigger hunger.
One thing’s for sure you would not look at the big
“M” the same way again after today.

An arrow that goes from a to z
shows the wide selection of
products the online store sells.

It may appear to you as a fancy way of writing the
letters VAIO, but the picture above shows the hidden
meaning behind the way it’s written.

It symbolizes a mountain, a metaphor for
the challenges and perceivable goals
that all athletes must meet and Its three-leaf shape is meant to
represent the main landmasses of
the Americas, Europeand Africa,
and Asia respectively. The
intersecting lines across the three
forms signify diversity.