Android hasn’t had the best track record when it comes to a true audio experience. Among these issues, audio latency has been a big deal for music creators. Even though the company says it is being worked on with each release, we have actually seen the issue get worse with some updates. Android P hopes to enhance the audio experience with a new audio framework that can be used for things such as increasing the bass, stereo enhancements, microphone noise suppression, and normalizing the volume levels of a movie or TV show you’re currently watching.

Details of this new framework were revealed during the last session of Google I/O 2018 where we learned that Android P is coming with what Google calls “Sound Amplifier” and the “Dynamic Processing Effect.” The goal here is to offer applications developers a way to produce superior sound in real time. The Dynamics Processing Effect will be baked into AOSP with the big Android P update so it will be available to all OEMs as well as application developers. However, some smartphone companies may still opt for 3rd-party or in-house solutions with their products. 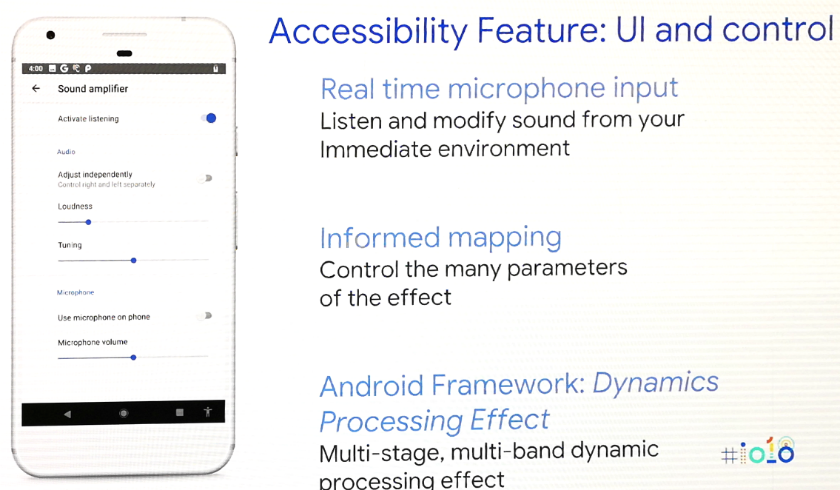 When Google spoke about the Dynamics Processing Effect we learned that it is being broken down into four different stages for each audio channel: PreEq, Multi-Band Compressor, PostEq, and Limiter. This new audio framework will support stereo as well as 5.1 surround sound too. At the input, we have a highly flexible PreEQwhich will allow developers to configure both the number and width of the bands. The second stage is a multi-band compressor/expander so the volume can either be smoothly reduced (compressor) or it can amplify the quiet sounds (expander). 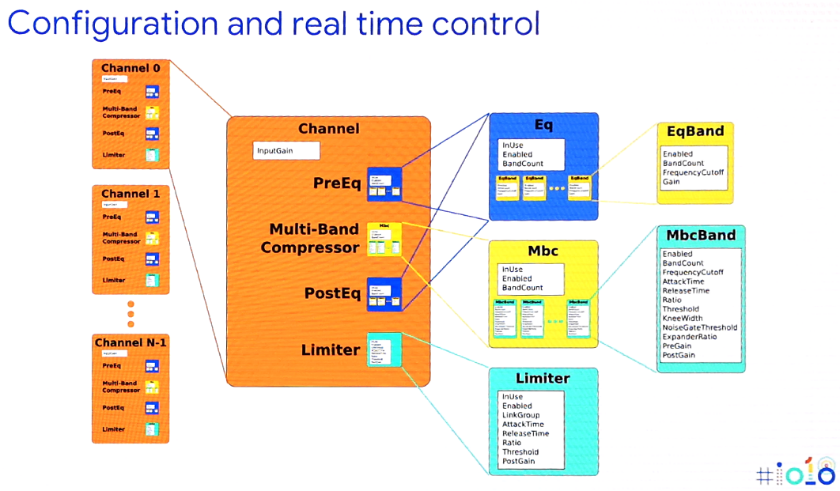 Stage three of this new audio framework is the PostEQ where the application developer now has the ability to fine-tune the output signal. Similar to the PreEQ, this will give developers full control over the filters. Last up we have stage four which is a single band limiter. This final stage is designed to roll off loud pops or other sounds, or even protect the output speaker or headphones. In each channel, the limiter can be added to a group which can then limit the entire group’s outputs by the same amount.

As with all Android tools and improvements, we’ll only see the benefits if manufacturers and developers put them to good use. Some OEMs will still prefer to use their own in-house tools. We know Google will put the tools to use in their own devices, but we’ll have to wait and see how others adopt them. These tools have the potential to greatly improve audio quality on Android